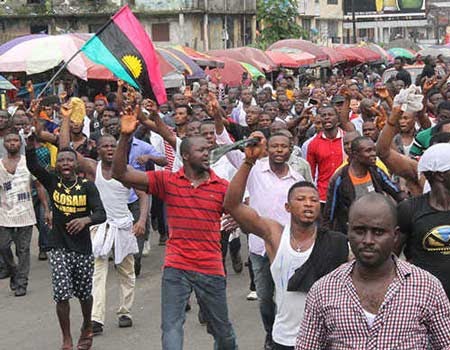 All seems tense in Anambra State – no thanks to threat issued by the proscribed Indigenous People of Biafra (IPOB) to security agencies over the enforcement of its May 30 sit-at-home order.

In a statement yesterday in Awka, the Anambra State capital, the outlawed association said that no intimidation and harassment from security operatives would make its members to withdraw the planned enforcement of its order.

He said the police would not tolerate any breach of the law by any group.

In a statement by Police Public Relations Officer (PPRO) Mohammed Haruna, the police chief reminded those threatening fire and brimstone to know that IPOB has been proscribed.

He said the police would not allow any miscreant or group to disrupt the peace in the state.

Haruna said the Joint Task Force (JTF) would not be intimidated by any form of threats from proscribed and faceless people, adding that any person or persons that would cause a breach of peace would have himself or herself to blame.

He said that already, the command, in conjunction with sister agencies, had deployed enough patrol vehicles to all the flashpoints, including Ekwulobia, Nnewi, Awka, Onitsha and its environs, adding that they are battle ready.

In the IPOB statement, the agitators had ordered their  members and the Igbo to stay at home on May 30 to protest the killings of their heroes during the civil war and others in recent times.

A spokesman for the proscribed group, Emma Powerful, vowed to die in the cause instead of allowing IPOB to be brow-beaten into submission.

The group alleged that Biafra had been under siege and must be rescued in the interest of unborn children.

The statement reads: “The indomitable IPOB family worldwide wishes to remind the Nigerian army, police and their collaborators within and without that threats, lies, propaganda, misinformation, arrests, torture, illegal detention, a corrupt complicit judiciary only serve to strengthen our resolve to restore Biafra not diminish it.”

“But one thing is guaranteed; the day of reckoning will come, when heaven and earth cannot contain the rage of the oppressed.

On that day, every person or persons that ever partook in the persecution of IPOB will pay dearly for it – they, and members of their families.

“We have resolved to make every sacrifice needed to ensure Biafra is liberated, therefore, we are prepared for this wave of onslaught against IPOB.

“We are consoled by the fact that the whole world is taking stock of what IPOB is being forced to endure because a time will come when the hunter will become the hunted.

“Biafra Remembrance Day is on Thursday, 30th of May, and Biafrans must not come out on that day. It will serve as a reminder to the overlords in Nigeria that we Biafrans are united in our quest to be free from the iniquitous bondage called Nigeria.

“IPOB is a disciplined movement that cannot abdicate its obligation to the dead. We owe it to our fallen heroes and heroines to honour them in the finest traditions of IPOB on May 30.

“No matter how many troops they deploy on our streets, or how many people they kill or arrest, Biafraland will be locked down on that fateful day.”